you're reading...
Arabia, By Year of Publication, Single Novels 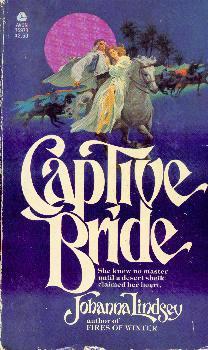 From the moment Philip Caxton sets his eyes upon lovely Englishwoman Christine Wakefield, he knows that he must have her. Born half-Arab and known among his people as Sheik Abu, he plots to have her kidnapped and brought to his remote camp in the desert.

Christina is angry and frightened when she suddenly becomes the helpless captive of this strikingly handsome stranger…but is soon weakened by her heart’s blazing desire to explore her virile captor’s most sensuous cravings. Her idyllic time with Abu is interrupted when she is kidnapped again, this time by another tribe. This act was done in order to lure the sheik to their camp so that an act of revenge for a past misdeed may be carried out. Abu rushes to Christina’s rescue and, after escaping a slow death, brings his beloved back to the safety of his camp. But their happiness is shortlived when Christina is falsely told that Abu no longer desires her and wishes her to leave. With a broken heart, she leaves the desert to return to her past life in England.

But nothing will ever be the same, as she still loves Abu and fears she may never see him again. Or will she?