Focus on Elaine Duillo (by Laurie) 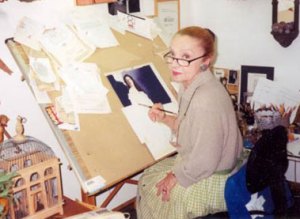 Some real reporting now. Since covers are such a big part of our genre, I decided to do a little snooping around. I discovered that, depending on the artist, a cover can cost anywhere between $2,000 and $10,000, with most falling in the $4,000 to $5,000 range. I discovered that, for artist Elaine Duillo, the first major woman cover artist who, when she started her career, had to work behind her agent because publishers wouldn’t hire a woman, she has, at least on one occasion, been paid more for her cover than the first-time author was for the book.

Even though I have never bought a book for its cover, even though I am not a fan of the clinch or heavily-peopled cover, I found my discussion with Elaine fascinating. Here is a woman, a professional illustrator, who started her career in the the late 1950s, and received $150 for her first job. She had trained at Pratt in commercial art, and when she got into the cover business, paperback books were thirty five cents. For a woman, she could get an entry- level job doing covers, often pretending she was a man.

Romance did not exist as a recognized genre then, so Elaine did a variety of covers, including mysteries and gothics. When the actual genre of romance developed, she was the first woman to paint their covers, working, at that time, for male art directors who wanted cleavage. Although she was doing half a dozen covers a month at the height of her career (she’s trying to retire now, at the age of 68, slowing down to a couple a month for he last ten years), she has never felt like a factory.

The Queen of the Covers now does lead authors only, and her most recognizeable covers are those of Johanna Lindsey and Bertrice Small (Bertrice, by the way, buys her covers as art and has filled her house with them). She is glad that computer-generated covers are being used for mid-list authors because it will allow her to retire.

Art directors are not just men any more, and with more women involved at higher levels in that end of the industry, the number of male character covers has grown. (Whether this is an improvement is up to debate!). Elaine herself is proud of her part in the final product, sharing with me which books (and her covers) have gone to number one on the bestseller’s list.

At a photo shoot, she directs the photographer in a scene she has created after reading the author’s manuscript (not all illustrators, she says, pay such attention to detail, resulting in the wrong hair color, eye color, etc.) After the shoot, she works from photographs in acrylic, shying away from body hair which she believes copies like dirt (what she’d have to say about the cover of Alice Duncan’s latest, of a man with a gloriously hair-covered chest, I don’t know).

She told me the titles of some of the covers she’s done, and we went through them together. She pointed out how she changed the chin and nose of Fabio on a particular Lindsey cover (an improvement, I might add!), and she added that the male models generally shave all their arm, under-arm, and chest hair (if they had any), and how odd it is to look at a man without hair on his arms.

While our discussion didn’t change my opinion of the value of covers, I came away with great admiration for Elaine, who is shown in galleries of important illustrators. I also went back and looked at some of the covers I generally overlook – those Avons and Leisures that are recognizeable to me from half a room away, and decided that, for what they are, some of them are beautiful. In other words, I found myself admiring them as an art form, if not as an appropriate means of selling a book.

One thought on “Focus on Elaine Duillo (by Laurie)”